Myth-Busting the Amazon A10 Algorithm: How Amazon Product Ranking Works 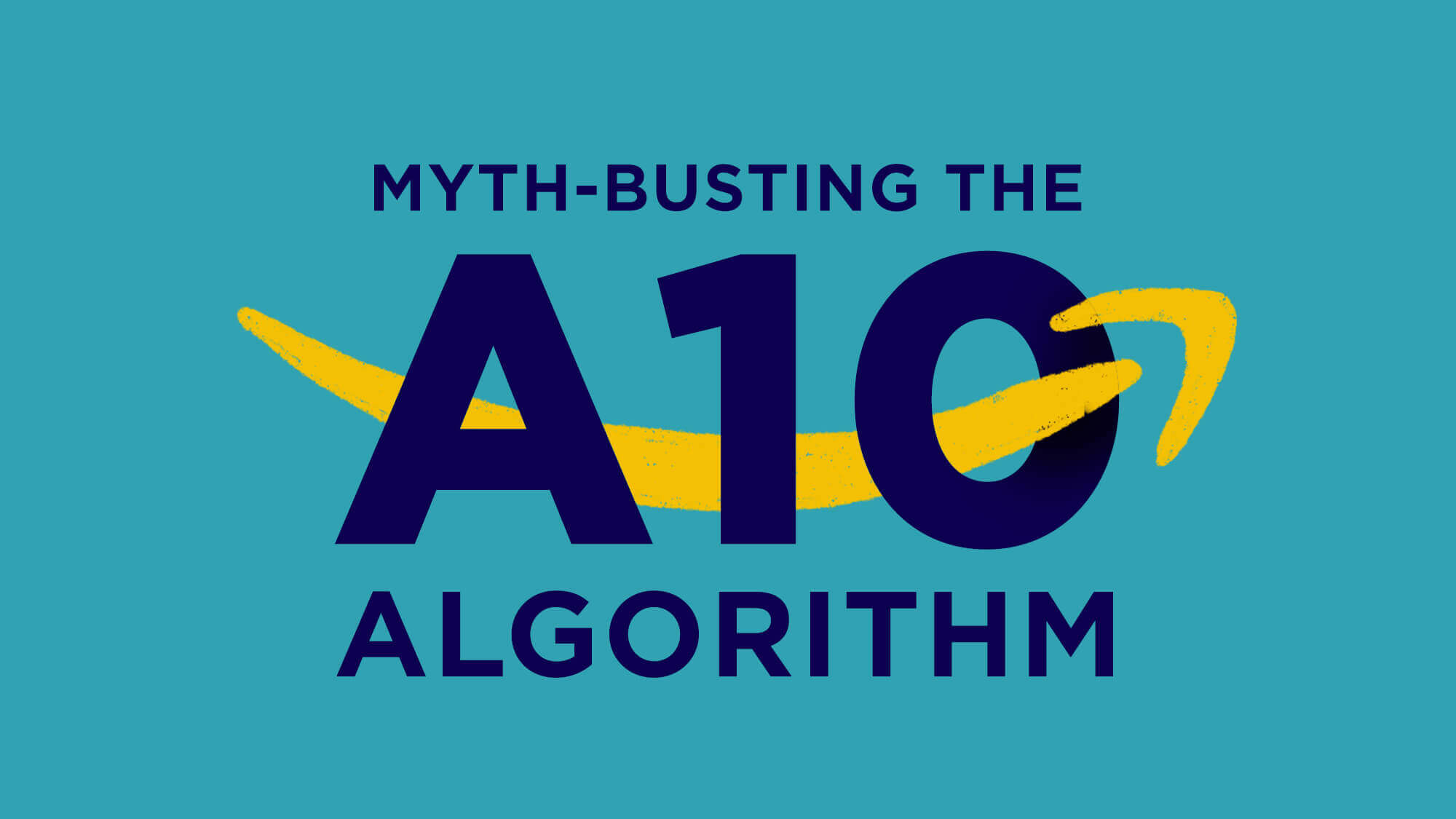 In late 2019, the Wall Street Journal reported that Amazon had changed its A9 algorithm to favor its own brands. By mid 2020, Amazon-focused businesses, including software providers, Amazon agencies, and third-party sellers, started posting articles about an “A10” Amazon algorithm, although they described different changes than the WSJ article. Blog posts about the A10 algorithm have continually popped up ever since, describing how factors that affect product rank have been changed to carry more or less weight than before.

So, we’re setting out to do some myth-busting. We’ve reviewed internal data to try to confirm or deny – based on Kaspien’s experience – claims about significant changes to the Amazon algorithm.

Myth-Busting Claims Made about the Amazon A10 Algorithm

Below are the common claims being made about the algorithm update, as well as what Kaspien’s data shows to confirm or refute the claims.

Shopper Searches Now Matter More in the Amazon A10 Algorithm

It is understood that Amazon’s algorithm looks at many factors to determine product rank, including ratings, reviews, seller rating, sales velocity, fulfillment method, inventory amounts, pricing, and many more. One of the most important factors is keyword relevancy.

Keyword relevancy simply means, how relevant does Amazon think your product is to a given search query? This is determined by the keywords incorporated into a product listing.

Some claim that under the A10 algorithm, keyword relevancy has been given more weight, with the goal of showing consumers what they want to see, rather than what sellers want them to see.

Plausible. Keyword relevancy has always been important for success on Amazon, and Amazon has built its empire by being customer obsessed. It wouldn’t be surprising if Amazon tweaked its algorithm to favor customer queries more.

However, this claim is difficult to confirm or refute because, as you will see later, other ranking factors, such as ads and fulfillment models, have not become less important. Furthermore, Marketplace Pulse notes that for years, Amazon has steadily replaced algorithmically generated recommendations on the search results page with ad placements. That Amazon would expand advertising then reduce its importance seems counter-intuitive.

On that note, let’s take a look at our next claim.

Amazon Advertising has Less Impact under the A10 Algorithm

Native Amazon ads, such as Sponsored Product Ads and Sponsored Brand Ads, now carry less importance for product rank under A10 than A9. Like the previous claim, the explanation is that Amazon is trying to show shoppers what they want to see by weighting other ranking factors higher.

Busted. Amazon advertising remains a key driver for increased traffic, click through rate, conversion rate, and sales velocity, all of which are important ranking factors. Amazon ad costs are rising, but this is due to sellers increasing their ad budgets after many pulled back ad spend in 2020.

This is reflected in Kaspien’s performance metrics. Comparing 2020 to 2021 year-to-date, we see that conversion rate and click-through-rate have both improved, while advertising cost of sale (ACOS) rose from 8.04% to 8.53% and cost-per-click (CPC) rose from $0.31 to $0.38. If advertising seems to be having less of an impact now, it’s because the rise in competition necessitates more sophisticated strategies.

We can also look to Prime Day 2021 to demonstrate the continued importance of Amazon advertising. Kaspien saw booked orders grow by 25% year-over-year, while our advertising revenues increased around 70% and impressions were up 40%, clearly demonstrating the impact of ads for channel growth.

Last but not least, let’s look at how Amazon itself is approaching advertising. In 2020, Amazon’s advertising revenue exceeded $21 billion, growing 66% year-over-year. Amazon has a vested interest in making ads a desirable offering on their platform, and they do that by maintaining their value to sellers.

Campaign profitability is dependent on campaign insights; if you cannot measure performance, you cannot improve it. So, how do you make sure you get the depth and breadth of insights needed? It all starts with campaign architecture. We’ve a whole (and free) eBook all about it. 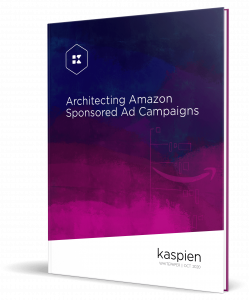 Amazon’s A10 algorithm greatly favors products that receive traffic from off-site. This would mean that Google Ads and social media advertising would play a much more important role in product rank on Amazon.

If true, this update to the algorithm is a frankly clever tactic by Amazon to grow their market share: they have significantly increased the incentive for sellers to actively promote their marketplace on other platforms. The existence of Amazon Attribution and the recent launch of the Brand Referral Bonus program lend some credence to this claim.

Plausible. The aforementioned WSJ article published in December 2019, and blog posts about the A10 algorithm became increasingly common starting around May 2020. If these blogs caught onto A10 shortly after its launch, we would expect to see products that were being promoted through off-site channels – such as Facebook or Google – to see an immediate improvement in product rank around the same time (assuming the brands had large enough audiences to send a notable amount of traffic).

Unfortunately, that’s a rather difficult assessment to make given the fact we had a global pandemic that drastically altered consumer buying behavior during this same time period. Supply chain issues, inventory shortages, a surge in online shopping, and more means there are simply too many concurrent variables to definitively say whether or not off-Amazon marketing has more weight.

All that said, even if off-Amazon marketing doesn’t have more influence on Amazon that it used to, it still has meaningful influence on Amazon, as it has for some years. Anytime you can direct more shoppers to your Amazon listing, regardless of source, it will impact your product rank. Learn more about using social media to drive traffic to Amazon.

Seller Authority Matters More in the A10 Algorithm

“Seller authority” consists of many factors, including the seller’s age, number of ratings, average rating, product return rate, return handling efficiencies, product catalog size, and product catalog diversity. The idea is that these factors are key indicators of how much value a seller adds to the Amazon customer experience. To reflect that, sellers with higher seller authority are more likely to win the Buy Box than newer/smaller sellers, all other things being equal.

These factors were considered under the A9 algorithm, but the A10 algorithm allegedly increased the influence these factors have on a product’s organic placement on the SERP. Once more, this claim is based on the idea that Amazon wants to improve the customer experience.

Plausible. Kaspien is one of the oldest third-party sellers on Amazon (founded in 2008). If this claim is true, then products sold by Kaspien should benefit. When we look at the data, we see that Kaspien and most of our partners have grown substantially YOY, but how much of that growth is attributable to seller authority is a hard thing to isolate.

We ran marketing for many of our brands, and we have dedicated account managers providing strategic guidance. There was also a global pandemic, which drove more shoppers to buy online than ever before. The truth of the matter is that seller authority never exists as a variable in isolation, so it’s nigh impossible to quantify how much impact it has on its own.

Since early 2020, Amazon has repeatedly restricted inventory quantity limits at FBA centers and raised the inventory performance index (IPI) requirements, making it challenging for brands to maintain sufficient inventory levels at FBA. As of July 2021, sellers are permitted 55 days of inventory coverage at FBA, including lead time.

Some have claimed that, because of this turbulence, Amazon’s algorithm is now no longer favoring FBA orders over FBM orders.

Busted. Reviewing orders from January-July 2021, we see no change in the ratio of FBA orders compared to FBM orders. If there was any favoritism in 2020, it is no longer present. 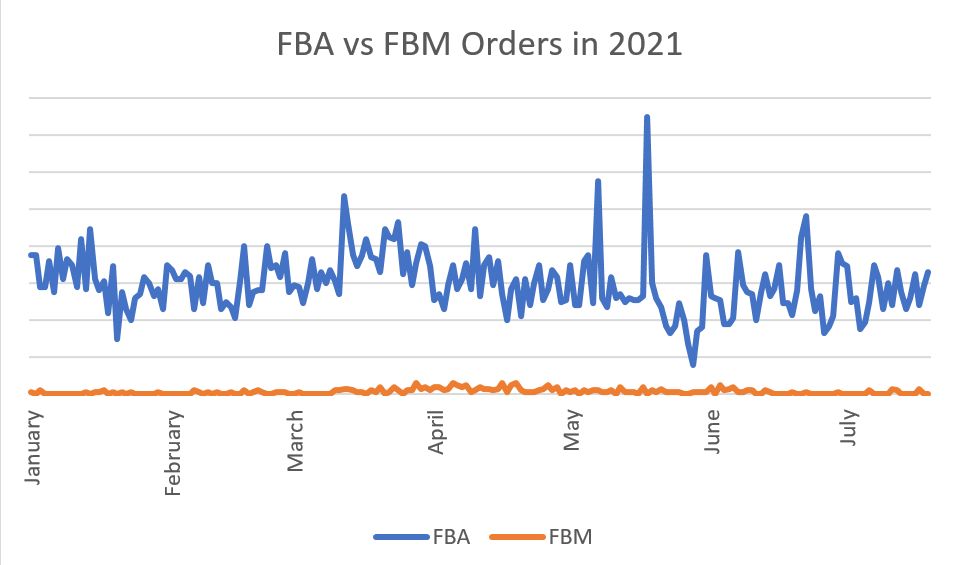 So, why might others have made this claim? Well, because Amazon FBA has been so turbulent, larger sellers have been forced to invest in more FBM options. As a result, FBM orders have risen, but not disproportionately to FBA orders. Learn more about the benefits of diversified fulfillment strategies for Amazon.

Other Variables that Affect Product Rank in the Amazon A10 Algorithm

The above list covers only claims about factors that had allegedly changed in Amazon’s A10 algorithm. There are many variables that can affect product rank, including:

How to Improve Product Rank in the Amazon A10 Algorithm

To improve organic product rank, focus on the following tactics:

Did You Find This Helpful? Keep in Touch

These tips are just scratching the tip of the iceberg. For more strategic advice for Amazon, subscribe to our weekly blog newsletter. If you want advice tailored for your brand, consider reaching out.