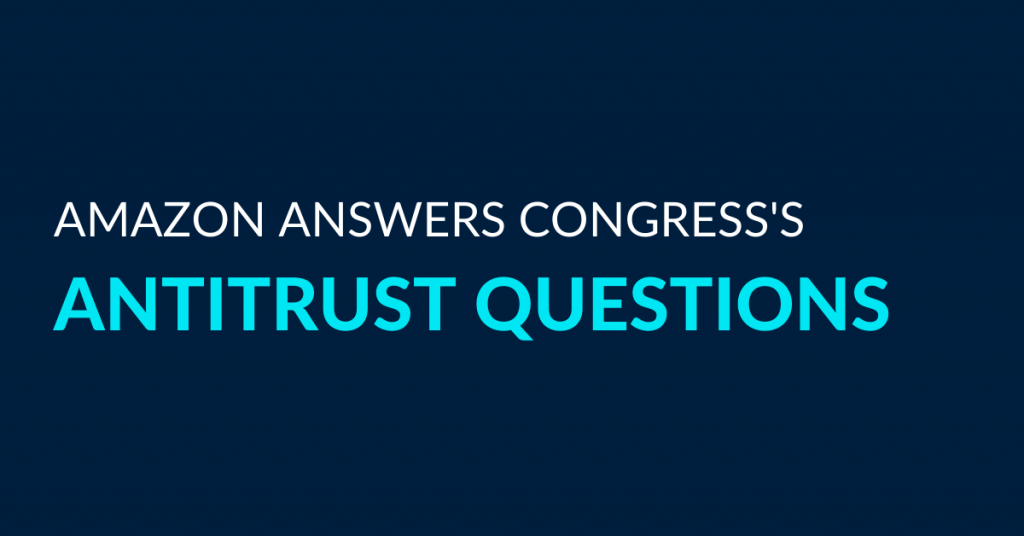 On July 29, 2020, Jeff Bezos testified before the US House Committee on the Judiciary. After the testimony, the committee submitted a list of additional questions for Amazon to answer in writing. The questions and answers were published on September 4th. We’ve reviewed Amazon’s responses in the Questions for the Record and identified some key takeaways for brands and third-party sellers that operate on the Amazon marketplace.

In short, Amazon openly admits to drawing on its enormous wealth of third-party data to improve its first-party offerings. However, it denies targeting any single seller because it anonymizes and aggregates data.

Amazon responded in multiple instances that Amazon uses anonymized, aggregated data to inform its decisions, including which private label brands and products it pursues. Amazon argued that this is an ability that any retailer has, ecommerce or brick and mortar. Amazon also stated that, like any other seller, its private label developers research public-facing content on listings, such as price, reviews, rank, and features.

Rep. Pramila Jayapal’s questions pressed Amazon to define “aggregated data” through a hypothetical: If a category consisted of one seller who accounted for 99% of sales and another seller who accounted for 1% of sales, would Amazon deem the combined data “aggregate data”? Amazon’s response that aggregate data is “data that is aggregated across multiple third-party sellers and, where available, Amazon’s first party sales,” suggested that it would.

This question and Amazon’s answer are important to note for brands that release innovative products. Even if Amazon reviews data at a category level (and Amazon did not specify how deep category levels go for their product development purposes), successful products in niche categories are particularly vulnerable to copycat products based on Amazon’s aggregated data and frontend research.

Chairman David Cicilline asked if Amazon considers profitability to Amazon when determining which seller wins the Buy Box. Amazon responded that profitability to Amazon is not a factor. Instead, factors such as price, delivery speed and cost, Prime eligibility, and seller performance determine Buy Box ownership. These factors are all things prioritized by Amazon first-party products.

Cicilline also asked if Amazon favors products fulfilled through Fulfillment by Amazon (FBA) are favored over non-FBA options. As with nearly every answer, Amazon responded in a roundabout way, stating that Amazon’s data shows that customers prefer orders with FBA over non-FBA orders by 9.46%. This answer suggests that, yes, Amazon does favor FBA orders over non-FBA orders, but justifies it by claiming it provides the superior customer experience.

However, this may change in the coming fourth quarter, as Amazon has been forced to impose inventory constraints across its fulfillment centers due to being unable to meet the surge in ecommerce purchases caused by COVID-19. Since inventory space is limited and in high demand, Amazon is focusing on higher-volume, faster turning ASINs, as well as higher-profit items, to ensure that products stored in Amazon fulfillment centers (FC) are worthwhile for Amazon.

Cicilline also submitted questions about what ratio of first-party products are sold through Alexa compared to third-party products. Amazon stated that third-party sales account for 45% of sales made through Alexa in 2020, despite accounting for 58% of sales of physical products on Amazon. Amazon stated this discrepancy is due to the fact that many sales on Alexa are for consumable household items, like paper towels and diapers, and Amazon has a larger first-party presence in this category.

Amazon also stated that only a low, single-digit percentage of customers complete the purchase of a product suggested by Alexa on Alexa. The clause “on Alexa” is worth noting, as it implies that the conversion rate for Alexa-recommended products could be higher if one tracked sales made on other devices. When Alexa recommends a product, shoppers may look it up on their phone to view pictures and read reviews, then purchase from their phone. Such conversions would not be counted in the low, single-digit conversion rate provided by Amazon.

Does Amazon Do Enough to Protect Brands & Consumers?

Representative Henry Johnson, Jr.’s line of inquiry focused on brand protection services available to sellers on Amazon, and by extension, consumers who shop on Amazon. His first line of questioning focused on Project Zero, an Amazon program that gives brands the power to take down counterfeit listings themselves.

According to Amazon, to be eligible for Project Zero, a brand must have a registered trademark, an Amazon account with access to Brand Registry, and have maintained an accuracy rate of higher than 90% for all notices of infringement submitted to Amazon in the prior six months. Requiring a high rate of accuracy for notices of infringement is critical to protecting honest sellers from abusive removals.

Amazon stated that currently, 10,000 brands are enrolled in Project Zero. When challenged why brands should have to police Amazon’s marketplace for it through Project Zero, Amazon stated that their automated brand protections proactively remove more than 100 items suspected of infringement for every 1 item that a brand owner manually removes.

Responding to questions about protecting intellectual property rights (IPR), Amazon brought attention to its IP Accelerator program, which connects brands with a curated network of trusted IP-focused law firms to help with trademark registration. According to Amazon, this program has connected over 1,500 brands to the network, and over 500 brands have received “accelerated protection” on Amazon.

As of September 1, 2020, Amazon requires all sellers to list their contact information on their public-facing Amazon seller profile page. Representative Johnson, Jr. asked Amazon how they plan to ensure that the seller information is accurate.

Amazon responded that they combine computer and human resources to validate seller contact information. However, many of their efforts seem to occur when a new account is created, so it is unclear how effective Amazon’s systems will be at retroactively identifying inaccurate information in existing seller accounts.

Does Amazon Knowingly Permit the Sale of Counterfeits?

Despite a plethora of anecdotes from consumers and brands about a pervasive counterfeit problem existing on Amazon and the Department of Homeland Security’s report from January 2020, Amazon continues to deny that counterfeit products are prevalent on the Amazon marketplace.

Amazon claims that 99.9% of all products viewed by customers on Amazon do not have a valid counterfeit complaint, although Amazon did not state how it determines which complaints are valid.

CJ Rosenbaum, founding partner of Amazon Sellers Lawyer, also cast further doubt on the sincerity of Amazon’s claim that it proactively fights the sale of counterfeit product on its marketplace. In an interview with Kaspien’s CEO and Director of Compliance, Rosenbaum shared that his firm recently represented a vendor who knowingly sold counterfeit product to Amazon Retail (first-party or 1P), and that Amazon Retail:

The below video starts at the segment where Rosenbaum shares the story.

The frankly shocking allegations can be listened to in full, here.

Other Notable Lines of Inquiry

The Future of Amazon

While Amazon is under fire from Congress for monopolizing the ecommerce space and stealing third-party data to usurp its customers, Amazon hasn’t broken its stride. Q3 is looking to be another strong quarter, with North American retail revenue forecasted to grow 30% year-over-year (YOY), compared to 21% YOY growth in Q3 2019. Likewise, Amazon’s advertising revenue is expected to grow 37% YOY in Q3, compared to 41% in the previous quarter.

Predictions for the Amazon Marketplace, Near and Far